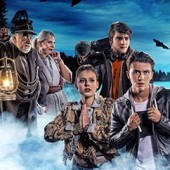 I’m very excited to announce I’m working  on this great new television show that starts airing on october 5th. The series is set in Kattenoog, a charming little village on the edge of a mysterious lake. For years, the village has been in thrall to the legend of a magic stone that attracts witches, vampires and ghosts. To protect Kattenoog’s inhabitants, the Mystery Club was founded a long time ago; Eli, Robin and Simone all dream of becoming members. But that dream won’t come true without a challenging adventure. The legend has also caught the attention of Max, Boris and Daphne of Booh-TV, an online channel specialising in scary myths. They head out to the village to check out the legend: will they discover the secret of the Magic Stone?